Once in a generation visionary and world-class Scientist

“…Since this could be the first time you might have heard this great man’s name, let me give you a little background.

Carver was born in slavery in the early 1860’s, in Missouri- USA. He experienced prejudice, cruelty, and discrimination because of his race.37 For instance, even though Carver was accepted into Highland Presbyterian College in Northern Kansas, he “was turned away when he showed up for classes and the school’s officials realized he was black.”

Regardless of these challenges, he attained purpose-oriented and vision-centered greatness. He became “the first black student and the first black faculty member at what is now Iowa State University and went on to become a well-respected botanist.”

Carver was also called a “Black Leonardo” and the greatest Scientist by Time magazine in 1941. The magazine enlisted his inventions: “developed 285 new uses for the peanut, got 118 products, including vinegar, molasses and shoe blacking, from the South’s surplus sweet potatoes.”

Here is what David Fairchilda famous scientist himself, said about Carver: “One of the most remarkable and extraordinary minds I ever met.” 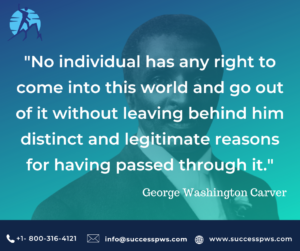 He made an appearance “before the House Ways and Means Committee” of US Congress. In his honor, a National Monument was erected in Diamond, MO, by President Franklin Delano Roosevelt. The monument was the first for an African American and a non-president.

Thomas Edison offered him a six-figure salary and state-of-the-art facilities to attract Carver and said to him: ‘Together, we can remake the world!’

He wasn’t also just a local hero. He was sought after by world leaders such as Mahatma Gandhi and Joseph Stalin.

His purpose was to improve the livelihood of farmers in the South. He used science and his ability to envision advancing his mission in life.

When you become a visionary, you provide for your cause and the noble mission of your organization. You go beyond your backyard to attract resources, support, and alliances.

That was what Carver did using his innate envisioning ability. At the end of the day, he attained purpose-oriented and vision-centered greatness.

How could he overcome those daunting challenges, fulfill his mission, and offer the poor farmers in the
South multiple alternative products for their farm produces against all odds?

It was because of his ability to envision. Circumstances around him didn’t stop him from envisioning well beyond his immediate conditions. He tapped into his innate ability to dive into the unseen world.

For that matter, he called his laboratory ‘God’s little workshop’. He didn’t over depend on his sight and what could be seen in the natural. He was in and out of the invisible world using his insight. He said, “Without God to draw aside the curtain I would be helpless.” Using his inner eye, he invented hundreds of ways of using a simple raw material- peanut, to empower poor farmers.

As a visionary, he was a far-sighted servant of a larger constituency than just the South, though. Visionaries like him are compelled to serve beyond self, their immediate families, and constituencies.

Carver was selfless. He was quoted as saying, “…the further anyone gets away from themselves, the greater will be their success in life… You can’t get very far in life if you don’t get away from self… and see a richer and broader horizon.”

Not only was Carver selfless, but he also was far-sighted and saw generations after him benefiting from his mission in life. Here is what he said about what motivated him to accomplish great things: “Well, some day I will have to leave this world. And when that day comes, I want to feel that my life has been of some service to my fellow man.”

I want you to read the following couple of paragraphs slowly…

We live in this miraculous universe. It doesn’t just exist in the physical. It’s not only full of ‘matter.’ Intelligence operates in it to function based on some physical and quantum laws.

The universe’s potential isn’t also limited according to what we can see with our naked eyes and sophisticated microscopes and telescopes. The more powerful and limitless quantum universe provides and sustains the physical universe.

If you know how to invoke your innate ability to envision, you can transcend the physical universe and matter. If you see things in the form of potential in the quantum universe, you can call them. And they translate from potential to realities and manifest in the physical world where everyone can see them.

The process from seeing to manifestation may vary depending on the faith of who is ‘seeing’ and what they desire to manifest. Otherwise, the law works for anyone and everywhere. It is just a matter of time. What you envisioned in the metaphysical universe using your mind’s eye manifests in due time.

I hope the above couple of paragraphs encouraged you to take your visioning ability to the next level. You need this competency to attain the second level of greatness.

To manifest the best version of yourself, you need to tap into your inner eye and the metaphysical universe full of potential, which you need to fund and sustain your purpose.

I can’t go any deeper than this for now. However, I will provide the latest insights, models, tools, approaches, strategies, and tactics to actualize what you visualize in my upcoming book, which focuses on visioning…”

Taken from The Highest Level of Greatness p. 133- 136. To learn more about the book: https://www.successpws.com/the-highest-level-of-greatness