If you closely observe successful people in your community or organization or in the marketplace, it doesn’t take you long to realize that they don’t shut up 🙂 They fully understand that with a shut mouth, a shut destiny is inevitable…

I’m not talking about people who open their mouths casually without paying their dues and doing their homework first.

These successful people I’m talking about know this popular saying and the consequences of opening one’s mouth for the sake of opening: “When you open your mouth, you tell the world who you are.”

I’m talking about those who open their mouths and speak like a pro.

What if you’re not one of them? Well, you can join these few elites, if you want to and are willing to do what they did to get where they’re today…

You may object and say, “AZ, I fear public speaking, or I hate speaking in front of people!”

I completely understand where you’re coming from.

First, you’re not alone. The overwhelming majority of people are afraid of public speaking.

Second, I relate with you. I was there. The fear is real. 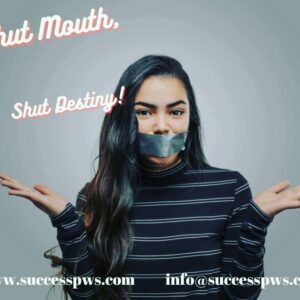 What is more? The fear doesn’t go away even if you become a pro except that its intensity diminishes with time and as you excel in public speaking.

The only difference between rookies and pro speakers is that the latter know how to channel fear quickly and use it for their own advantage. That is it!

By the way, no worries, you too can do just that. There is a science behind why we feel nervous and how to channel it. It’s not rocket science, anyone willing can learn how to do it like the pros.

You may ask at this point: “What made these pros break free from the fear of public speaking and why are they still going through the nervousness that accompanies public speaking?”

They’ve more fear of the things they passionately hate. Their desire to beat what they hate and get what they love outweighs the fear of public speaking.

That is why they rather prefer to pay forward their precious time, energy, and money to excel in public speaking. As a result, they don’t have any extra resources left to entertain and sustain fear of facing what they dislike and not getting what they love.

To read why I don’t hate nor love speaking but I do it anyway, and why you should also do the same, click here and check this blog and let me know your take on this.